SPOTLIGHT ON TFOME: Computed Tomography for the Icing Research Tunnel

The Icing Research Tunnel (IRT) creates conditions similar to an aircraft flying through clouds and is one of the most heavily used facilities at the NASA Glenn Research Center. The IRT differs from most wind tunnels, as the air can be cooled to well below freezing temperatures and has a series of spray nozzles that produce super-cooled water particles that simulate different types of clouds. These clouds of tiny water droplets are carried past a test article that is mounted in the 6 ft. high by 9 ft. wide test section. The cloud should be as spatially uniform and repeatable as possible. The cloud must be calibrated for uniformity and total amount of water that flows through the test section. This calibration has many different conditions to vary, including air speed, temperature, cloud water content, and droplet size – thus being complicated and time consuming. A partial calibration is performed once every six months, and a full calibration is performed approximately every five years.

The current method of icing cloud uniformity measurement is done by bolting a metal grid in to the test section to collect accreted ice on the exposed faces during the icing spray. The grid is 6 ft. by 6 ft. and is made of 6 in. square cells. The tunnel is run for a set of test conditions with a spray. The facility is shut down, and the accreted ice is manually measured by a technician entering the tunnel using a caliper to determine the ice thickness, and analyzed to determine the cloud uniformity.

At the end of last century (1999), a system to aid in the calibration, as well as real-time monitoring of the cloud was proposed. The system uses light extinction tomography to monitor the spray distribution and density as a function of position in the test section. A large number of lasers are sequentially projected across the test section, where many light detectors measure the intensity of light along the path from the laser to the detectors. It takes two measurement conditions to generate an image of the density and uniformity of the cloud, a reference condition, when no cloud is present, and a second when the cloud is present. The data is reconstructed using tomographic algorithms similar to those used in medical imaging, except that the cloud data uses a soft-sided Gaussian blob (kind of a hilltop-looking feature), and not a function that has high, spatial, differences (as needed for medical diagnostics). A second unique feature of this system is the rectangular geometry, which is very much different than the standard circular cross-section geometry.

This system was demonstrated for the first time in the IRT during the week of February 12, 2018. The laboratory development apparatus was mounted slightly downstream of the test section to save time and money (not building a second rig that would fit in the test section for this proof of concept testing). Data was acquired from a variety of standard spray conditions and simulated faults to determine the sensitivity of the light extinction tomography system. This effort was an excellent start for this promising technology. 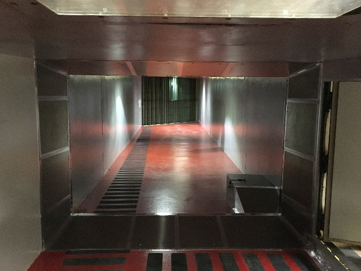 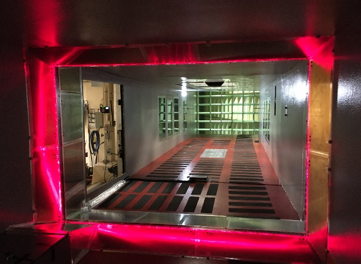 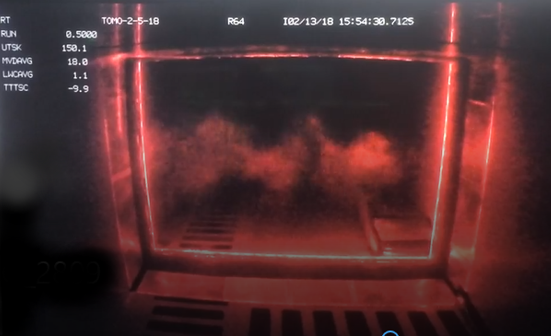 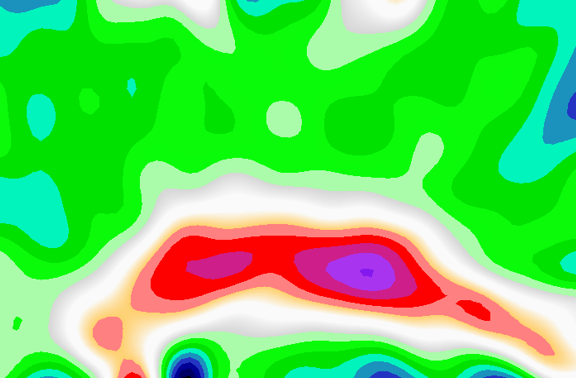 Tomography Reconstruction of the Same Single Spray Bar, Averaged over a Minute