Sierra Lobo was a sponsor of the third annual NASA 5K Moonwalk & Run at the Langley Research Center on the morning of June 5, 2016. The race day activities included the LaRC Kids K, for kids ten and under (sometimes with a little help from their sponsoring adult).

The 5K course featured many facilities that highlight what is done here at the NASA Langley Research Center such as the four large vacuum spheres along Langley Blvd., several wind tunnels and labs, and most impressively, through the NASA hangar full of aircraft on display.

As an organization, Sierra Lobo is community-outreach oriented. We believe that being a good corporate citizen means using our human and financial resources to give back to society and our immediate communities. Sierra Lobo supports multiple initiatives and charitable programs through employee efforts and volunteerism. We particularly enjoy supporting and furthering the talent found in our community members and education system. We collaborate and team with many schools and related educational programs to ensure our youth are educated in scientific principles and have fun learning about science. This enthusiasm involving the commitment of time and effort from our employees cannot be fabricated – and we hope it is contagious. 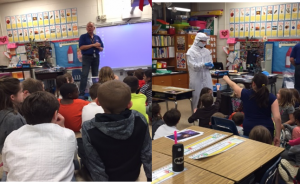 ETIS II Manager, Nick Hovaker, was a guest speaker at the Millersville Elementary School Second Grade classes. He spoke with the children about space, spaceships, thermal blankets and the solar system. Nick also provided the children with samples of thermal blanket material, bookmarks and other memorabilia. The children asked questions and were highly entertained when Nick had one of the teachers put on the “bunny suit” and appropriate Contamination Control attire commonly used in the cleanrooms at Goddard Space Flight Center. Engineer Kevin McDonnell was asked to present to a group of first graders to explain some of the work that is done at NASA. The presentation took place at Westowne Elementary School in Catonsville, MD, and the children asked many questions regarding WFIRST, JWST, and the numerous satellites that GSFC has launched in the past. Kevin was asked to return later in the year to talk to the entire school. 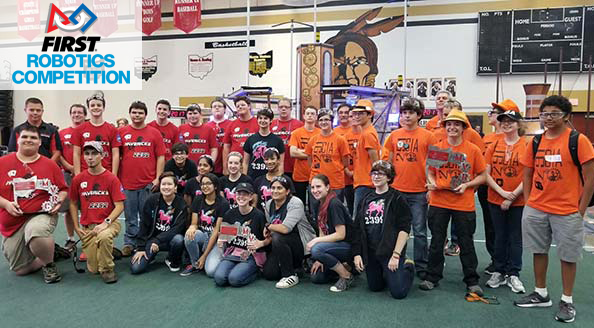 FIRST Robotics Competition (FRC) Team 2252 “Mavericks” of the EHOVE Career Center in Milan, OH, recently won the 2017 Mahoning Valley Robotics Competition (MVRC). FRC 2252 successfully defended their 2016 MVRC win with Alliance Captain FRC 2399 “The Fighting Unicorns” of Hathaway Brown School for Girls in Shaker Heights, OH, and FRC 6291 “FBI – Fostering Better Innovation” of Erie, PA.  At the end of morning qualification matches, the Mavericks found themselves in Last Place, but were able to “dust off the cobwebs” and make a competitive showing in the afternoon.  The Official 2017 Season ended for the Mavericks in April 2017 at the FRC World Championship in St. Louis, following a record-setting year.  Numerous unofficial off-season events (such as MVRC) are held across the world, each year, in order to give teams an opportunity to introduce new team members to the competition; further inspire students to consider careers in Science, Technology, Math and Engineering (STEM); and have fun in a relatively low-pressure environment.

Sierra Lobo has sponsored FIRST Robotics Competition (FRC) Team 2252 from the EHOVE Career Center since its inception in 2007.  In 2012, the team won both the Engineering Excellence Award sponsored by Delphi, and the Industrial Design Award sponsored by GM.  The team performed within the top 10% of all FRC teams worldwide. Considered “The Varsity Sport for the Mind,” FRC combines the excitement of sport with the rigors of science and technology. Under strict rules, limited resources, and time limits, teams of high school students are challenged to raise funds, design a team “brand,” hone teamwork skills, and build and program robots to perform prescribed tasks against a field of competitors.

Sierra Lobo’s Manager of Engineered Systems, Mr. Alex Yeckley, has worked on this program with the EHOVE youth for the last eleven years. Mr. Yeckley provided great direction and support to the Robotics team. As a result of his leadership, the EHOVE event has grown substantially.

To learn more about the FIRST Robotics Competition, visit https://www.firstinspires.org/robotics/frc.

After spending six months learning and communicating via the web, 170 rising high-school seniors from across Virginia will finish an intensive Aerospace Education Program by planning a mission to Mars during three, week-long, summer academies at NASA Langley Research Center (VA).

Students are part of the Virginia Aerospace Science and Technology Scholars (VASTS) Program. This is an interactive, online science, technology, engineering and mathematics (STEM) learning experience that offers student participants workforce experience, as well as college credit. VASTS academies are held every summer between June and July. “We give the students the opportunity to learn and develop the tools and skills necessary to be successful in the future STEM and Aerospace Workforce,” said Amber Agee-DeHart, VASTS Program Manager.

While at NASA, scholars will use what they learned online by designing and implementing plans for a human mission to Mars. They will also tour various facilities, build and test robotic rovers, and work with NASA mentors and subject matter experts, teachers, and undergraduate interns.
During their week, scholars were divided into five teams: Mission Integration, Mission Transit, Human Factors, Science and Surface Operations, and the academy’s first Strategic Communications Team. Each team plays a vital role in planning a successful mission to Mars.

The VASTS Program (modeled after the High School Aerospace Scholars Program designed at NASA’s Johnson Space Center in Texas) is a partnership between the Virginia Space Grant Consortium and NASA Langley Research Center (VA), with assistance from the Virginia Department of Education. Sierra Lobo has been a Corporate Sponsor since it started. 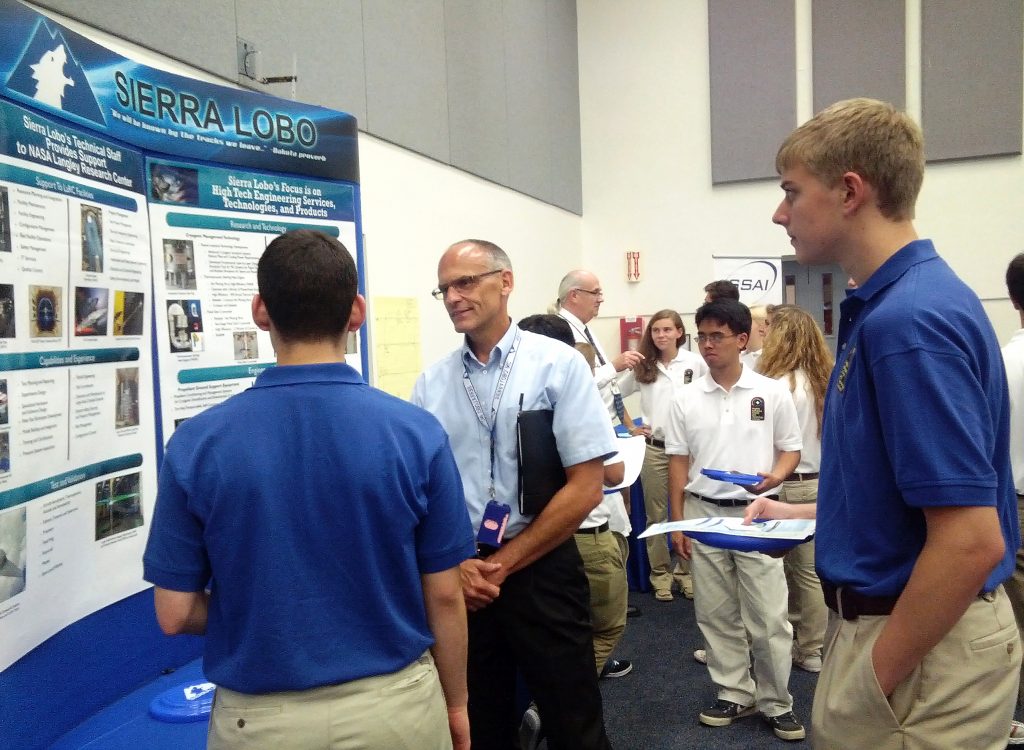 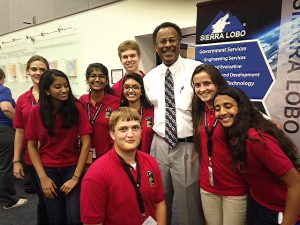 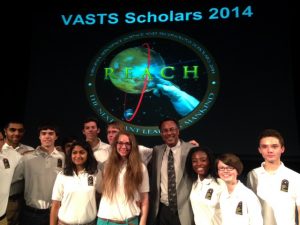 To learn more about the VASTS Program, visit http://vsgc.odu.edu/VASTS/. FIRST Robotics Team 2252 (the Mavericks) was a member of the winning alliance at the FIRST Robotics Competition Buckeye Regional in Cleveland, OH. This qualified the team to compete in the FRC Championship held at the Edward Jones Dome in St. Louis, MO, April 24-28, 2013. The team previously qualified for the Championship formerly held in Atlanta, GA in 2007 and 2010. This year the team was also awarded the Innovation in Control Award sponsored by Rockwell Automation at the Pittsburgh Regional and the Industrial Design Award sponsored by General Motors at the Buckeye Regional. This year the game is known as “Ultimate Ascent” in which robots (each weighing approximately 150 lb) must launch Frisbees into a variety of goals under both human and automated control to score points in a series of 120second matches. Additional points are scored at the end of each match by robots, which can climb a 10’ tall tubular steel pyramid.

The FIRST Robotics Competition is one of several annual competitions designed for students aged 6-18. Known as the “varsity sport for the mind,” its primary intent is to encourage students to pursue careers in Science, Technology, Engineering,and Mathematics following high school graduation. This is the 22nd year of the competition, in which an estimated 51,000 students and 15,000 adult mentors will participate via 2,548 teams worldwide. Over $16M in scholarship opportunities are offered to participating students. The Buckeye Regional is organized by the Ohio Aerospace Institute and the NASA Glenn Research Center Educational Programs office and is sponsored by numerous community and industrial partners in the NE Ohio region, including the TFOME contract and Jacobs Technology, Inc. This year 53 teams competed at the Buckeye Regional, which is one of 58 regional events occurring over a six week period.